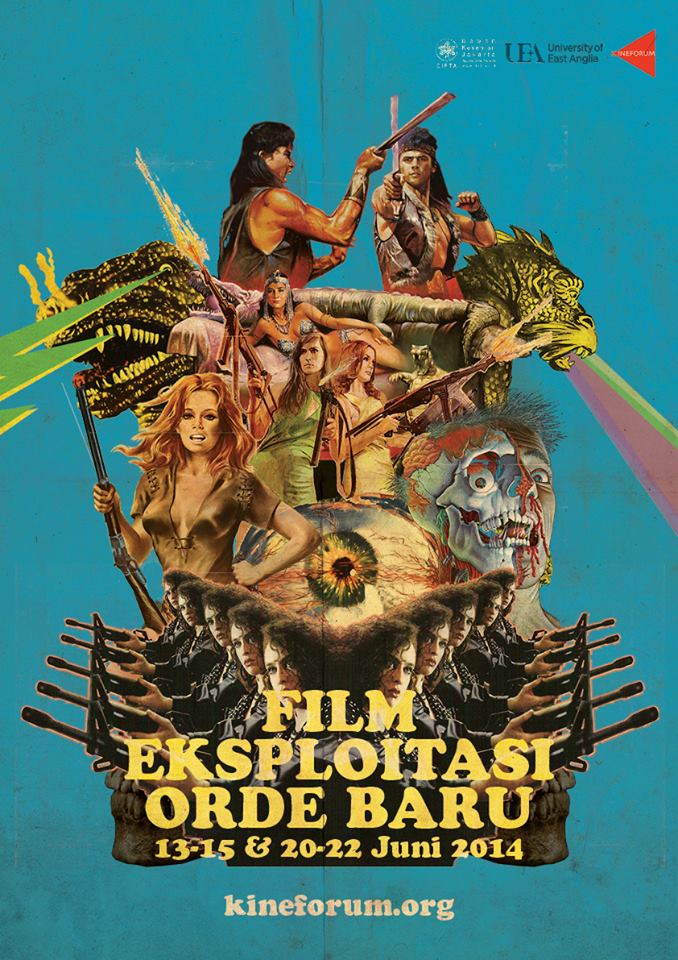 On Saturday, June 14, 2014, Mr. Ekky Imanjaya, our film faculty member who is now on sabbatical to become a candidate of the Doctorate degree in University of East Anglia, Norwich, held a discussion together with Kineforum Jakarta about the Indonesian cult cinema era. Mr. Imanjaya presented his thoughts and ideas about the Indonesian cult cinema back in the 1980s and 1990s, which was the era of Soeharto’s New Order, as part of his Doctoral research in film studies.

The sexploitation and sadistic films during the Indonesian cult cinema era were produced massively during the New Order era, although it was denied and not appreciated by the Government as part of the Indonesian culture’s form for its low quality (both in the production mode and the story), although many film academicians and cultural humanists claimed that it should also be considered as Indonesian legitimate culture. The Government and the cultural elites believed that Indonesian cinema should portray the stuff that can offer educational and cultural purposes. At the moment, the Hollywood cinema was so dominating that the Ministerial Decree 71/1967 gave the “obligation to film importers to pay a flat tariff of Rp250.000, – per film”. On the other hand, the other regulations made by the Government also actually supported the rise of the later being called as “trashy films”, which then became the trademark of the Indonesian film industry during the 1980s and the 1990s era.

The trashy films rise when the Government “helped” in a way by giving looser censorship for both Indonesian and imported films, which then made the number of Indonesian films developed dramatically. With the Ministerial Decree no. 47/1976 that stated that “film exporters are obligated to produce 5 films (later, reduced to 3) for the right to import films 1975”, more trashy films were produced for the sake of fulfilling this rule and regulation, so that the film importers can import films. Although the 1977 Censorship Guideline stated that Indonesian “films should avoid issues on destroying the unity of religions in Indonesia, harming the development of national consciousness, and exploiting feelings of ethnicity, religion, or ancestry or incite social tension” and the 1989 Censorship Guideline also stated that Indonesian “films should represent truly “national” characteristics”, the sexploitation film productions could not be stopped or reduced.

The Film Law no. 8 /1992 stated that “a film should be preserving and developing of national cultural values, constructing the nation’s character and personality as well as improving human dignity, maintaining public order and a sense of decency and presenting wholesome entertainment in accordance with the norms of life”. Although not long after it the fall of the trashy films era began to happen, these sexploitations films began to be re-circulated by the transnational film distributors. Labeled as “cult films”, these Indonesian sexploitation films were celebrated by its fans and buffs from all over the world.