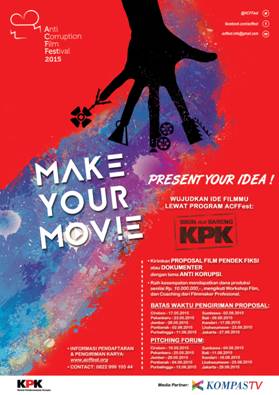 Creative ideas pitching and short film screenings on the theme of anti-corruption.

This year ACFFest has a special program to Make a Film with the Corruption Eradication Commission (KPK). The program begins with the competition of short film and short documentary proposals in which participants must follow the pitching forum held in 10 cities during the Movie Day Roadshow events. KPK team will select the best film proposal from each city to be produced with the coaching of professional filmmakers appointed by the Committee. The film produced will receive production funds of Rp. 10.000.000, – (ten million rupiah). For schedules and creative ideas pitching procedures, see the attached form. Please click Form Bikin Film Bareng KPK – ACFFest 2015

The deadline for Jakarta is August 27, 2015. Submit your application to acffest.info@gmail.com