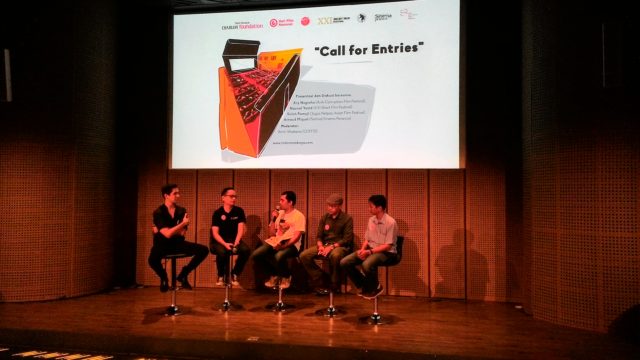 “This is essentially a festival for campaigning ideas,” said Ary Nugroho from Anti-Corruption Film Festival, “in which we select films that bring about anti-corruption stance.” For Ary Nugroho, styles and technical stuff are not top prioritries. “What counts is the message of each film submitted.”

Meanwhile, Suluh Pamuji from Netpac-JAFF addresses the concern of his festival, i.e. topics related to cinematic representation of Asia. “It can be re-inventing Asia, or becoming Asia. Novelty in styles does matter.”

Although less topical and by no means addressing social and political issues, Nauval Yazid’s XXI Short Film Festival  takes a programming policy rather similar to Anti-Corruption Film Festival. “We’ve never had a theme as it might impose a certain limit on submission. But we put two main categories of genre: firstly, drama and comedy , and secondly,  sci-fi, fantasy, and action.

“The main task of Netpac-JAFF programmers is to collect films. Phillip Cheah from Netpac, who uses to travel from one festival to another around the globe, collects Asian films while my friends and I, as local programmers seek new talents from different communities.

Anti-Corruption Film Festival’s jury has partly been a group of representatives from KPK (Corruption Eradication Commission)  and partly from filmmakers. Twenty best films from previous year will screen across fifteen 15 cities and towns. “Filmmakers keep the copyrights of their own work; we have only rights for screening their films,” said Ary Nugroho on the screening policy to which XXI’s Nauval Yazid was in agreement.