The Significance of Garin Nugroho

Garin Nugroho is not only one of the most prolific and prominent directors working in Indonesia, but also one of the most well-known Indonesian filmmakers present on the international film festival circuit. Often, when global scholars, film curators, and critics discuss Indonesian cinema, Garin is the first name in the conversation.

Born in Yogyakarta in 1961, Garin Nugroho is significant in the Indonesian film scene for several reasons: he has been par t of the innovations, breakthrough movements, achievements, and challenging explorations in film aesthetics, technologies, and storytelling, not to mention one of the first who dared to break the Suharto government’s so-called “New Order” authoritarian regulations.

Garin is, as far as I know, the first Indonesian director to be discussed in a full book, namely Philip Cheah’s edited collection And the Moon Dances(2004), the title taken from Garin’s third film, And the Moon Dances (Bulan Tertusuk Ilalang, 1995), which won the FIPRESCI Prize in the Forum of New Cinema at the Berlin International Film Festivalin 1996. In the same year, Busan Film Festival curated a special program titled “Garin and the Next Generation: New Possibility of Indonesian Cinema”.

As well as making award-winning fictional films, Garin also made documentaries, some of which were described by David Hanan in Indonesia at the margins: political documentaries and essay films, 1991- 2002. Recently, Garin gave his idea, modified from his second feature film, Letters to Angel (Surat Untuk Bidadari, 1994) to Mouly Surya from which she produced Marlina the Murderer in Four Acts (2017), paving the way to Cannes’ Director’s Fortnight.

Globally, his name then, is embedded within any discourse on Indonesian cinema. When I was in Berlinale in 2008, the year Garin was the head of jury for the Forum Section (several of his films were screened in this section), I witnessed many filmmakers from all around the world, particularly those from Southeast Asia, pay him the highest respect. At that time, he was interviewed by a journalist from Cahiers du Cinema. As I witnessed, this kind of respect was also shown on other occasions, notably at the 2008 Rotterdam Film Festival and ten years later, when I helped him perform Setan Jawa (2017) in London and I accompanied him during an interview with the BBC.

It is impossible to discuss all of his work and cultural involvements here. So, I have chosen to focus on selected topics and films. 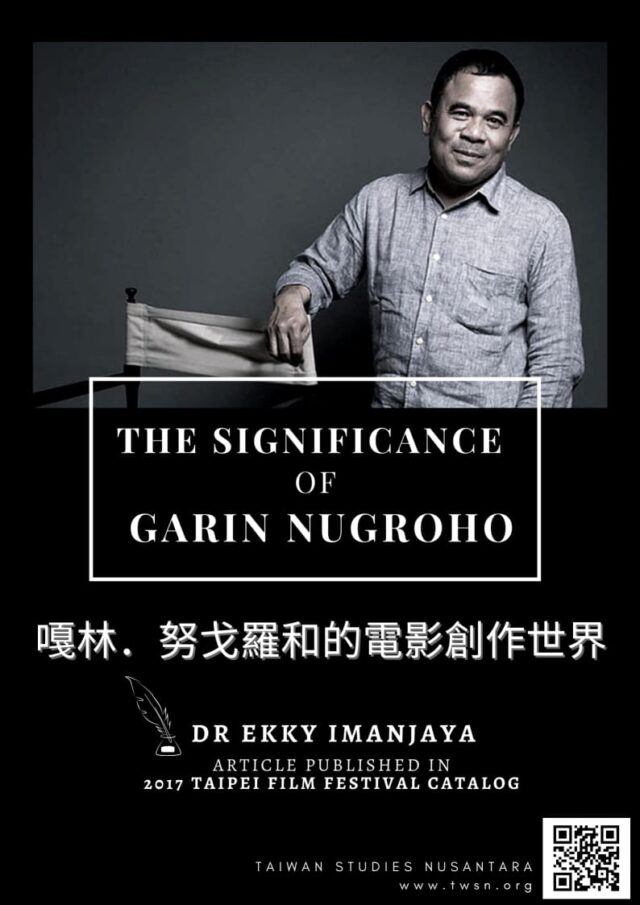 In the 1990s, while B-grade sexploitation film dominated the industry and other directors were unable to produce films due to the financial crisis (one or two titles such as Marsinah (1995) excepted), only Garin was persistently making films.

He produced his first film, Roti Love on a Slice of Bread (Cinta dalam Sepotong Roti), in 1990. The film was the first Indonesian road movie. It won 6 Citra Awards, including Best Picture, at the 1991 Festival Film Indonesia, and won him the Best Young Director Award at the Asia Pacific Film Festival 1992 in Seoul. In making his first film, he led the way for filmmakers to make films without following the usual “Internship policy”. Commonly, during Suharto’s New Order era (1966-1998), there were several strict regulations, including the Internship Policy. So, for example, in order to be a professional director, one should become an assistant director for certain time. Initially, the law was applied to filter out communist influence from Indonesia, but later the strict laws were applied to many daily activities. But Garin skipped the internship process. He broke the rules. And later, many young filmmakers also broke the rules and made films, such as Kuldesak in 1998.

After the downfall of Suharto, his film Leaf on a Pillow (Daun di Atas Bantal, 1998) was among the first box office successes during early Reformasi era and started a new era for the film industry in Indonesia, along with other films made by the New Generation of Indonesian cineastes , such as Mira Lesmana, Nan Achnas, Rizal Mantovani and Riri Riza (Kuldesak, 1998), Riri Riza (Sherina’s Adventure, Petualangan Sherina, 1999), Rizal Mantovani, Jose Purnomo (Jelangkung2001), and Rudi Sujarwo (Ada Apa dengan Cinta, 2002). Following the malaise of economic condition in which audiences were not eager to go to movie-theaters due to the bad quality of the trashy sexploitation movies, these films encouraged domestic spectators return to movie-theaters and allowed national films to eventually regain the audience’s trust. Shot with a Neorealist approach, this film was selected for the Un Certain Regard Section in the 1999 Cannes Film Festival. His other film Serambi (Verandah, 2005, an omnibus project with young filmmakers) was later also selected in this section.

Interestingly, Garin seems never make films with the same look and feel. He always tries to make different kinds of movies. With his auteurist signatures, he tries different approaches and styles to highlight the rich traditions of Indonesia’s diverse culture at the same time trying to represent an “Indonesia-ness.” Garin has unique stories, storytelling, and artistic approaches, combining those rich traditions of Indonesian culture with modern issues and perspectives, together making his work artistically distinctive.

One of his highest achievements in artistic exploration is Opera Jawa (Requiem from Java) from 2006, produced after he was commissioned by the Peter Sellars’ New Crowned Hope Festival to celebrate the 250th anniversary of the birth of Mozart. Other movies in this project included I Don’t Want to Sleep Aloneby Tsai Ming-liang and Syndromes and a Century by Apichatpong Weerasethakul. In this movie, he combined Gamelan and Javanese styles of opera and dance, formulating those elements as storytelling in order to reinterpret the Ramayana story. He collaborated with Rahayu Supanggah, a Gamelan maestro, and dancer Eko Suprianto, who was also, incidentally, a consultant for the Broadway production of Lion King and one of Madonna’s choreographers.

Another great achievement is Setan Jawa (2017), a silent movie accompanied by live Gamelan orchestra and which blends Javanese arts with the style of German Expressionism, in particular Nosferatu. This spectacular show was only shown in a few great halls around Europe and Australia, Garin once again collaborated with Rahayu Supanggah. In some films, he adopts a Neorealist approach, in Of Love and Eggs (Rindu Kami PadaMu, 2004), A Poet: Unconcealed Poetry (Puisi Tak Terkuburkan, 2000) and Leaf on a Pillow (Daun di atas bantal, 1998).

Regarding the novelty of technology, Garin was one of the first person in the world that applying digital filmmaking by making A Poet: Unconcealed Poetry with digital video format in 2000. This new format enabled him to shoot lengthy single shots of more than 10 minutes each. Most recently, he made A Woman from Java (Nyai, 2016) using a similar one shot technique.

Garin also likes to explore through documentary. One of his best is Teak Leaves at the Temple (2008), which fuses free jazz Concerts played in temples along with stories and performance from local communities and music groups, including Lima Gunung. Somehow, metaphorically, the spirit of free jazz and Javanese culture has some surprising similarities.

Garin is also a social, cultural and political activist who has written many essays and books. Moreover, some of his films have strong political messages. For example, he depicted Papua’s conflict in Bird Man Tale (Aku Ingin Menciummu Sekali Saja, 2002) and also Aceh’s conflict and the 1965 Event (also represented in The Act of Killing (2013) and The Look of Silence (2015) in A Poet: Unconcealed Poetry.

Related to the phenomenon of intolerance and terrorism, he made The Blindfold (Mata Tertutup, 2011), asserting that middle-class educated people can be brainwashed by Hardliners. And with Guru Bangsa Tjokroaminoto (2015), a biopic on the mentor of young Sukarno (later, the first President of Indonesia in 1945) and other important figures, he tried to question the idea of being Indonesian. Lastly, with Memories of My Body (Ku Cumbu Tubuh Indahku, 2018), he told a story about Juno, a male dancer who practiced Lengger Lanang dance and Gembyak, traditions associated with LGBT themes, which raised some protests from some groups within Indonesian society.

Interestingly, Garin had never received a Best Director award in Indonesia until 2018, when Tempo Film Festival, run by Tempo Magazine, chose him as Best Director along with Memories of My Bodyas Best Picture. I was part of that jury and I believe we made the proper decision. Furthermore, in 2005, Garin co-founded the Jogja-NETPAC Asian Film Festival (JAFF), a film event that celebrates film culture with the audience, encouraging spectators from countries all around the region to be very active and full of spirit.

Dr Ekky Imanjaya’s article titled “The Significance of Garin Nugroho”, available in English and Chinese. About the importance of the films (the restoration, the content, and the context). *It was originally published in 2017 Taipei Film Festival catalog. *