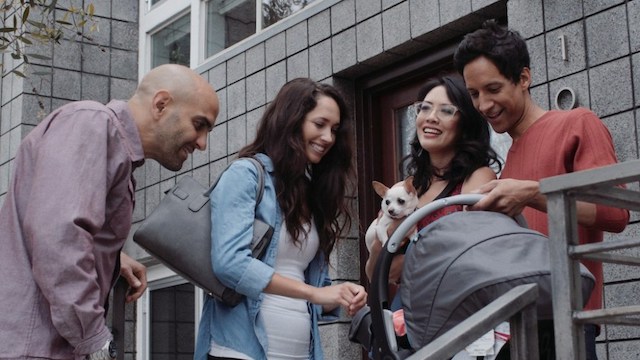 Babysplitters takes the term “co-parenting” to a whole new level. When married couple Jeff and Sarah Penaras (Danny Pudi and Emily Chang) face the classic argument of whether or not they should have a baby, they start to rethink their whole life and whether or not a baby would fit right into it. Sarah, in her mid-thirties, thinks that her biological clock is ticking fast. Jeff, on the other hand, is not happy with his nine-to-five job, and would like to have a demotion so he would be able to work in the field instead of his current boring desk job. During a smart sequence when Jeff and Sarah visit friends who are married with children, we can see how Jeff and Sarah view kids through different lenses. Jeff, through his over-the-top antics, is literally chased by unruly children, while Sarah has a pleasant time playing tea party princess with a little kid.

Throughout the film, parents will relate to the witty, punctual jokes on parenthood as well as the lingo, something viewed as weird or even eccentric by people with no children. Which sane man would wear fake breasts just so his baby would drink milk without having nipple confusions? Who would want to see a hundred pictures of the same baby in your smartphone? But of course it is different when we are talking about pictures of our lovely pets!

As Jeff and Sarah split the dinner tab with best friends Don and Taylor Small (Eddie Alfano and Maiara Walsh), the couples jokingly thought of a plan to share the responsibility and share the love. Because, why not? It makes perfect sense: they will split the baby’s time with each couple during the week so both couples will have half a week as parents and the other half as romantic couples. But, of course, it is not as easy as it seems.

First, there is the weird sex that will traumatize everyone for the rest of their lives (including the audience!). Then, there are twins and triplets (wait, what?). And then, the gay couples (who are more “conservative” than the Small-Penaras).

Besides having an original premise and taking it to the extreme, Babysplitters has a well thought-out story with a lot of hints dropped which lead to satisfying pay-offs. It works as a comedy, while touching many aspects of life, from having a relationship, feeling discontented with our jobs, to the crazy journey of having kids. Everyone who sees this film will have some connection that they can relate to, one way or another.

Another strength of Sam Friedlander’s film is the characters, played by a perfect cast. Every single character adds the absurdity of the story. And sure, as a romantic comedy, this film has the perfect Hollywood happy ending that will make you feel good after seeing it, but with a smart twist where everything seems natural and logical, even to the point where we as the audience might have an ‘aha’ moment when we realize what has actually been going on (hinted cleverly in plain sight and satisfyingly paid off towards the end of the film).

All in all, it is one of my most favorite film of 2019 because it is not only refreshing to see an original story among so many films out there which are adapted from properties that already have an audience. Also, it is always good to have genuine laughs from good comedy. It reminds us that, even though having a baby is such a serious business, we can always find a fun side to it.

Babysplitters was shown at CAAMFest 2019 on May 11. It will be shown again on May 15