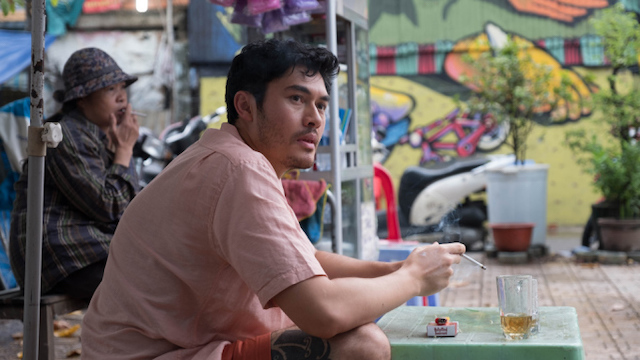 As the title suggests, Monsoon is a film about struggle and change, both in the weather and landscape of this Vietnam-set film and inside the mind of the main character Kit, played brilliantly by Henry Golding. Famous since his big screen debut as Nick Young in Crazy Rich Asians (2018), Golding transforms here into a young British man who has belatedly returned to his homeland, Ho Chi Minh City, to find the right place to scatter the ashes of his parents. Thirty years ago, his parents fled with Kit and his brother to escape the raging US-Vietnam war. With rusty Vietnamese, Kit embarks on his self-paced journey in the middle of busy Ho Chi Minh City.

Understandably, he feels like a tourist in the city, which is consistently referred to as Saigon to show the past identity that Kit holds on to as his dear homeland. This sense of alientaton is expressed in Kit’s telephone conversation with his brother. Since Kit uses headphones, the audience only hears the side of Kit’s conversation and wonders about the complete discussion between the two. Kit’s loneliness is unmistakable in this film, with most scenes showing Kit alone being pensive. Even when he was on a group tour, we could see Kit posing awkwardly with one of the other tourists helping him take his photo. His continuously displayed reflection on windows refers to his inner reflection about the past and his life’s meaning so far.

Sometimes, Kit opens the door for others to enter into his life, one person at a time, while the other characters only become the background, either because of the limitations of language differences or there is no need for them to go deeper into Kit’s life. There are only three central figures who left impressions during Kit’s trip to Saigon and Hanoi. The first one is Kit’s cousin and childhood friend Lee (David Tran). The second one Linh (Molly Harris), an art guide who shows Kit how to make lotus tea in Hanoi. Lastly, there is Lewis (Parker Sawyers), an American who is developing his business in Saigon. Lewis becomes a love interest for Kit, who, at the same time, becomes a friend to share his contemplations. Their encounters make Kit’s rumination about his past even more intriguing, considering that Lewis is a black American whose father fought in Vietnam. Through smart dialogues, writer-director Hong Khaou shows how complex the two men’s identities are, mostly since they meet in Vietnam. Lihn, on the other hand, is a character who reveals that the traditional side of Vietnam is still alive through art and lotus tea. She is also the person who helps Kit digs up his childhood memories of his mother. 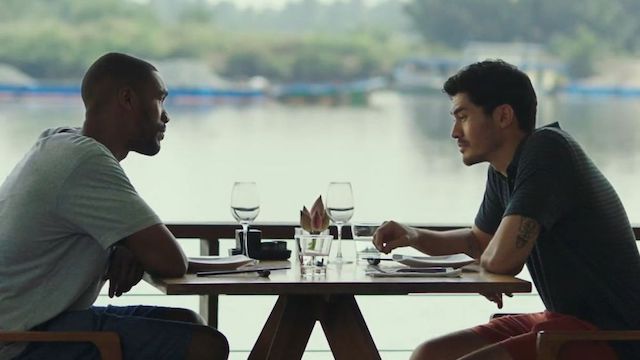 Even though it has been thirty years since leaving Vietnam, Kit still seems to think of Saigon as his home. He often tries to grab the memory of his hazy past while asking Lee to help him remember and collect childhood photos. On the other hand, as a character who did not make it out of Vietnam when the war raged, Lee does not understand Kit’s desire to hold on to Vietnam of the past. When the big rain comes and washes over Saigon, at the same time the change within Kit reaches its apex.

Each of these supporting characters offer their complex intersectionalities to help Kit navigates his past, present, and future. At the same time, they strengthen Kit’s presence on screen and move his storyline forward. This shows Khaou’s strength as a filmmaker who not only thinks about framing each scene with effective cinematic language, but also thoroughly researches the characters, places, and histories that bind them together. Without being a tourist film, Monsoon invites its audience to contemplate the alienation of familiar places and, vice versa, the comfort of foreign spaces. It prompts us to ponder the real meaning of home and makes Monsoon well worth seeing.

Monsoon is distributed in the UK by Peccadillo Pictures.