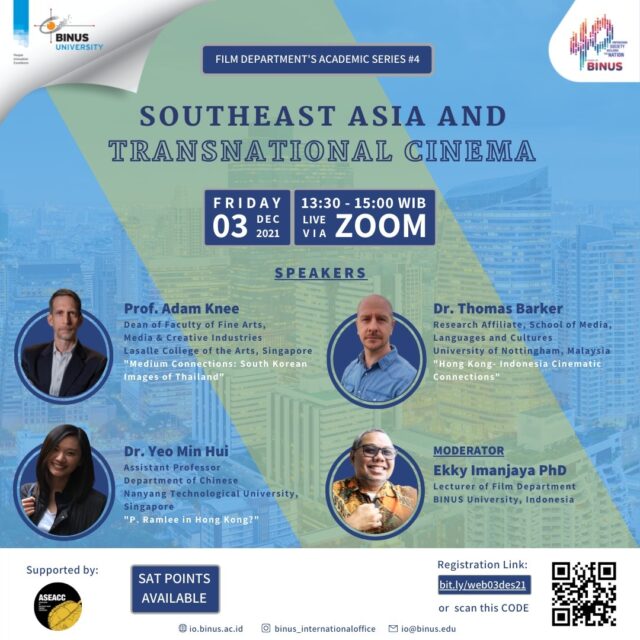 P. Ramlee is indisputably the most celebrated film star and director in Malay film history narratives today. Much has been said about his artistic contributions to Malay cinema, particularly his use of social realism and championing of local concerns. Unbeknownst to many, however, is his attempt at transnationalizing Malay cinema. In the 1960s, P. Ramlee made plans to make a series of Malay films in Hong Kong in what would have been Malay film industry’s first few attempts at transnational film production. In this presentation, I seek to reconstruct the narrative of P. Ramlee’s “Hong Kong endeavour”, hoping to revisit and interrogate this early moment of transnational(izing) Malay cinema.

Yeo Min Hui received her DPhil degree from the University of Oxford and is an assistant professor at the Department of Chinese at Nanyang Technological University. Her research interests include film and cultural connections between East and Southeast Asia. She has co-edited a pictorial biography on the “Queen of Amoy-dialect Cinema”, Chong Sit Fong, entitled Xue Ni Fang Zong Zhuang Xue Fang (雪霓芳踪莊雪芳) (Singapore: Lingzi Media, 2017). Her first monograph, Our Cinema, Our Home: Amoy-dialect Cinema and Dialect Identity Transformations in Singapore and Malaya (1948-1966) (我们的电影，我们的家：厦语电影与新马厦语身份的渐变 (1948-1966年)) (Singapore: Centre for Chinese Studies, Singapore University of Social Sciences, 2020), was published in 2020.

The current Thai-South Korean co-produced horror hit The Medium is but the latest example of cross-pollination and cross-talk between Thai and South Korean media industries (and the interpenetration of their popular cultures), over the past decade in particular. This inter-relation has included several instances (although not a profusion) of South Korean-produced projects that feature representations of Thailand—a trend which in turn can be seen as part of a long-standing phenomenon of global screen representations of Thailand, Thai culture, and Thai people.

This presentation will be concerned with trying to tease out some of the characteristic qualities of recent South Korean screen representations of Thailand—and to see how these sit in relation to global tendencies in figuring the country. Such global representations have involved a constellation of iconographic images and stereotypical assumptions about Thailand that have had distinctive variations but also striking continuities across time and media-industry geography. This talk will start with a brief overview of relevant contexts of recent South Korean representations of Thailand, and move on to an analysis focusing on the recent popular Thai-set South Korean action film Deliver Us from Evil (2020).

Adam Knee is Dean of the Faculty of Fine Arts, Media & Creative Industries at Singapore’s Lasalle College of the Arts. Prior to this, he held appointments at University of Nottingham Ningbo China (where he was Head of the School of International Communications and Professor of Film and Media Studies), Nanyang Technological University (Singapore), and Ohio University (US). He has also been a Fulbright grantee (in Thailand) and a Research Fellow at the International Institute for Asian Studies in Leiden, the Netherlands. He has broad interests in Southeast Asian and US popular film.

Thomas Barker is a Research Affiliate with the University of Nottingham Malaysia and previously a visiting scholar at National Chengchi University, UCLA, and the National University of Singapore. He is the author of Indonesian Cinema After the New Order: Going Mainstream (2019, HKU Press).

See you on Friday!